May 17, 2022 A first-of-its-kind security analysis of iOS Find My function has identified a novel attack surface that makes it possible to tamper with the firmware and load malware onto a Bluetooth chip that’s executed while an iPhone is “off.” The mechanism takes advantage of the fact that wireless chips related to Bluetooth, Near-field …

May 17, 2022 An unidentified threat actor has been linked to an actively in-development malware toolkit called the “Eternity Project” that lets professional and amateur cybercriminals buy stealers, clippers, worms, miners, ransomware, and a distributed denial-of-service (DDoS) bot. What makes this malware-as-a-service (MaaS) stand out is that besides using a Telegram channel to communicate updates …

May 17, 2022 The European Parliament announced a “provisional agreement” aimed at improving cybersecurity and resilience of both public and private sector entities in the European Union. The revised directive, called “NIS2” (short for network and information systems), is expected to replace the existing legislation on cybersecurity that was established in July 2016. The revamp sets ground …

May 17, 2022 A 28-year-old Ukrainian national has been sentenced to four years in prison for siphoning thousands of server login credentials and selling them on the dark web for monetary gain as part of a credential theft scheme. Glib Oleksandr Ivanov-Tolpintsev, who pleaded guilty to his offenses earlier this February, was arrested in Poland …

May 15, 2022 Ever thought about working full-time in cybersecurity? With millions of unfilled jobs around, now is a great time to get into the industry. Of course, there are many different roles in this field. But all of them require the same handful of professional certifications. The 2022 Ultimate Advanced CyberSecurity Professional Certification Bundle helps you … It turns out that packets are involved in everything you do on the Internet. Packet is a basic unit of communication over Computer Network. Every Web page you receive, every e-mail you write is also made up of packets. Packet switched networks are networks that transport data in small packets. 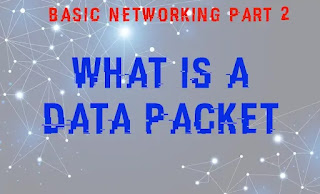 What is a Packet?

On the Internet, an e-mail message is broken down into bytes of a specified size. These are the individual packages. Each packet contains information that will assist it in reaching its destination, such as the sender’s IP address, the intended receiver’s IP address, and a number that tells the network how many packets this e-mail message has been broken into. The data is carried in packets by the Internet’s protocols, Transmission Control Protocol/Internet Protocol (TCP/IP). Each packet contains a portion of your message’s body. Typically, a packet has 1,000 to 1,500 bytes.

Each packet is subsequently sent to its destination through the best available route, which may or may not be shared by all other packets in the message. This improves the network’s efficiency. First, the network can millisecond-by-millisecond balance the load across several pieces of equipment. Second, if a piece of network equipment fails while a message is being sent, packets can be routed around the fault, ensuring that the complete message is delivered.

Most network packets are split into three parts:

Header – The header contains information about the data that the packet will carry. These instructions may contain the following:

Payload – Also known as a packet’s body or data. This is the data that the packet is sending to its intended destination. If the payload of a packet is fixed-length, it may be padded with blank data to make it the proper size.

Trailer – The trailer, also known as the footer, usually contains a handful of bits that inform the receiving device that the packet has ended. It may also include some form of error detection. Cyclic Redundancy Check is the most prevalent type of error checking employed in packets (CRC).

CRC is a really cool program. In some computer networks, this is how it works: It puts together the sum of all the 1s in the payload. The result is saved in the trailer as a hexadecimal value. The receiving device adds up the 1s in the payload and compares the result to the trailer’s value. The packet is valid if the values match. However, if the values do not match, the receiving party will be notified.

Consider how an e-mail message might be divided into packets as an example. Assume you’re sending an e-mail to a friend. The size of the e-mail is approximately 3,500 bits (3.5 kilobits). You’re sending it across a network that employs 1,024-bit fixed-length packets (1 kilobit). Each packet contains a 96-bit header and a 32-bit trailer, leaving 896 bits for the content. Four packets are required to separate the 3,500 bits of message into packets (divide 3,500 by 896). The payload will be 896 bits in three packets and 812 bits in the fourth. The contents of one of the four packages would be as follows:

The proper protocols, as well as the originating address, will be included in the header of each packet.

May 14, 2022 Google on Thursday announced the creation of a new “Open Source Maintenance Crew” to focus on bolstering the security of critical open source projects. Additionally, the tech giant pointed out Open Source Insights as a tool for analyzing packages and their dependency graphs, using it to determine “whether a vulnerability in a dependency might affect your …

May 14, 2022 A spear-phishing campaign targeting Jordan’s foreign ministry has been observed dropping a new stealthy backdoor dubbed Saitama. Researchers from Malwarebytes and Fortinet FortiGuard Labs attributed the campaign to an Iranian cyber espionage threat actor tracked under the moniker APT34, citing resemblances to past campaigns staged by the group. “Like many of these attacks, the email contained …